The impact of Brexit is heavily impacting the UK automotive industry. In February, Honda announced its plans to close its Swindon car plant, while Nissa...

The impact of Brexit is heavily impacting the UK automotive industry. In February, Honda announced its plans to close its Swindon car plant, while Nissan has revealed that it is looking at the possibility of reducing it operations in Sunderland, impacting UK employment figures.

Job search platform Joblift analysed all 20mn online job ads from the last two years to see what was being reflected in the recruitment world for the automotive industry. With the uncertainty of Brexit and subsequent number of job losses, the business looked to see if there was a decline in the number of jobs advertised.

Cities like Bristol, Sunderland and Birmingham have been big names in the headlines for job cuts, but Bristol has the largest growth in job ads for the automotive industry with a 6% monthly average – six times more than the national average. In Sunderland there is a 4% monthly increase, followed by Dagenham (3%) and Birmingham (1%). Coventry is one of the only cities where the postings for the available positions in the sector have significantly slowed with an average 3% monthly decrease.

Additionally, its analysis found that vehicle mechanics are the most in-demand role making up 9% of the 133,094 roles advertised in the last 24 months. Other popular professions include customer service manager, ranking second with 5%; repair and maintenance technician (2.5%); and software engineer (2%). Furthermore, a surprising 7% of automotive job ads were advertised as apprenticeships, which may indicate that companies are hopeful for the future of the industry and its growth potential. 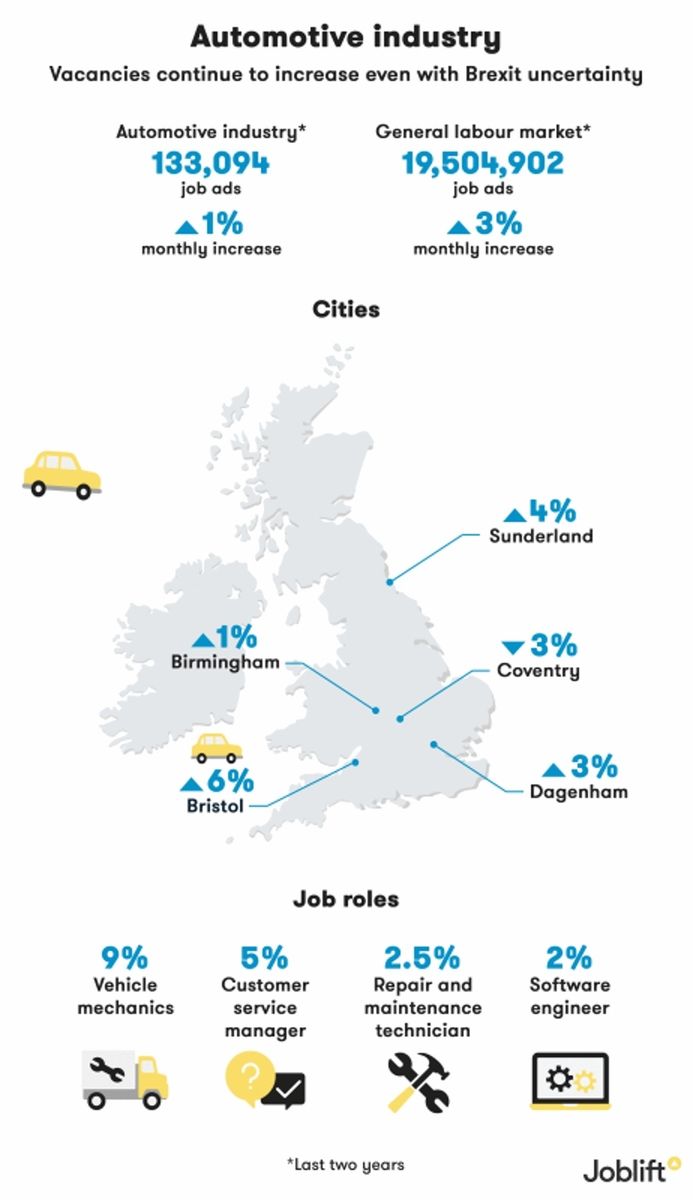